Hey guys in this post, we will discuss the Java 3 tier/layer architecture in detail.

3-tier architecture is a client-server architecture in which the functional process logic, data access, computer data storage and user interface are developed and maintained as independent modules on separate platforms.

A “tier” in this case can also be referred to as a “layer”. The three tiers, or layers, include: 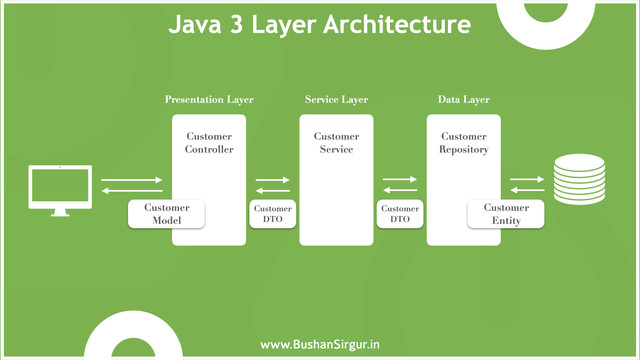 In order to understand better, i created a video on Java 3 layer architecture –

If you work on any Java enterprise application, that application is divided into 3 main layers that is because if our application starts growing, its very easy to maintain and debug the application. Each layer has its own roles and responsibilities. Let’s discuss these layers one by one in detail.

Next is the Service Layer, which is the middle layer, it sits between the Presentation Layer and Data Layer.

Please note that Service Layer never accepts HTTP requests and it never manages the control flow of the application.

The last layer is the Data Layer. It responsible for communicating with the database. It performs all the database operations such as create, read, update and delete, it even contains database queries which are required for the application.

The Data Layer contains, DAO (Data Access Objects) objects or sometimes called as Repositories, these are the one which contains all the database things, like creating queries, deleting queries or some other sql queries.

The Data Layer also contains Entity objects, these are the POJOs which contains, private fields, setters, getters and toString(). These are the objects that will persist in the database. These objects also contains some annotations (with Spring and JPA) which are required to persist the data, establish relationship between the other entities.

Alright, that’s it. That’s all about Java 3 Layer Architecture. If you found this article useful, please share this with your friend and colleague. A day out with family ## #santebennur #pushkarni

I started learning graphic design. I can create an

Different ways to create #javascript object into a

A pic from my recent trek 🥳 #trek #traveling #

“I'm a dreamer. I have to dream and reach for th

“I think there is no place in the world 🌍 whe

“When the sun🌞 has set, no candle🕯can repl

"Wherever you go, no matter what the weather, alwa

"Even if I knew that tomorrow the world 🌎 would

“If everyone would look for that uniqueness then

“It’s not th beauty of a building 🏢 you sho

“Each night, when I go to sleep, I die. And the

“If you truly ❤️love nature🏞, you will fi